ホーム > 更新情報 > 立教生の声 > My winter holiday with my friend Amber 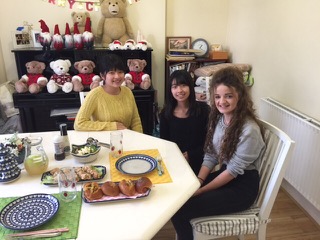 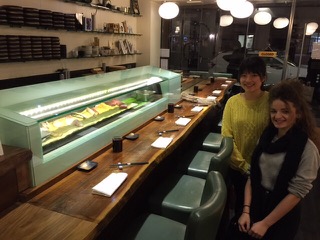 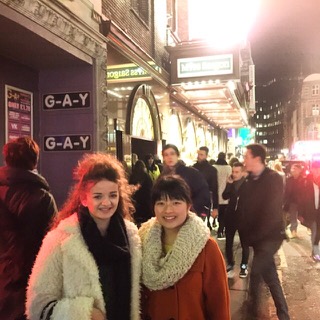 Last year, I did a student exchange and  I stayed in touch with them.
Whilst we emailed each other, we decided we should  meet up again at my house in London.
So, Amber came to my house for 3 days just before Christmas and it was a fantastic time for me.
She said to me that she had studied about Japanese culture before and wanted to learn more.
First, we went shopping in Piccadilly Circus. We walked around and talked about each other a lot. Amber was looking for her Mother and sisters’ Christmas Presents.
Then, we went to a Japanese restaurant. My Father and I thought she should try “real” Japanese foods.
We had sushi, udon, yakitori, miso soup, tempura, sashimi, green tea, kara-age and macha flavoured ice cream.
We also went to a Japanese store which sold many kinds of Japanese Foods.  While we were in there, we saw all the Kagamimochi and Amber knew what it was. This surprised me because it is a traditional Japanese food and I didn’t think it would be popular among foreigners. She explained that she knew what it was because she had studied Japanese new year’s events at school. However, there were some mistakes in her knowledge, so I explained that and corrected her. I think learning only by books about other cultures is limiting. It is the same for me when I learn English. Luckily, I live in London and spend most of the year at Rikkyo, so I have no choice but to learn about the English culture directly from experience.
During our time together, we watched “Miss Saigon”.  It is a musical about the  Vietnam War.  Amber had studied about the war before, and I was really interested in it because my teacher told me it is a great musical and had advised me to watch it someday. So we decided to watch the musical together.
Also, we made homemade Japanese foods together such as Omuraisu, Takoyaki and cookies.  Amber said that she likes Omuraisu. I hope she will make it again at her home.
She said usually British people wouldn’t eat octopus as they do not find its appearance very appetising.
However, she has a lot of spirit and was eager with her inquiries. This pleased my Mother and I. For me, foreigners wanting to know about our country’s culture makes me happy, because we can take pride in our culture.
My father is a trader and he works for a Japanese food company.
He is proud of his country’s foods, so he does his job because he wants other people from all over the world to enjoy Japanese foods. I think people being proud of their culture is very important.
If we love our country, I think we should want to know about other countries. If we do, communicating with other countries about things such as political matters will be much easier to do.
If we want to be citizens of this world, we have to love our country and culture. We should want to know about the history of our country and take pride in it.
If people think like that, I think they will be able to love and want to know about other cultures, whilst also respecting them. If we want to understand and use the language, surely we should know about the place it has originated from.
I’m not saying the world should view everything on equal terms. We are all different as individuals. Yes, the differences are what makes our world! But we should, must even, respect each other and keep making an effort to know one another.
That was one of the most necessary things I kept in mind throughout the exchange. Thanks a lot Amber!
（高等部２年生 女子）