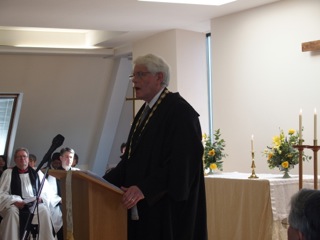 毎年本校の卒業式では、その年にイギリス社会との交流に最も貢献した生徒に対して、地元ホーシャム市の市議会議長より「アンバサダー賞」が授与されます。今年 は、多くの対外試合を通して現地校の生徒たちとの交流に積極的に関わったバスケットボール部の部長がこの栄光に与りました。それに先立って市議会議長から頂いたお話を以下にご紹介します。
＊   ＊   ＊   ＊   ＊
When I arrived this morning with my wife, I realised that although this would be an enjoyable morning, it was also likely to be an expensive morning.   This is because coming here today has re-awakened my wife’s interest in visiting Japan.
Speaking to the Headmaster before this graduation ceremony, he asked me whether I would mind the fact that the speeches this morning would be in Japanese.   I told him I didn’t mind and that I am sure, even in Japanese, the speeches would be more intelligible than some of the speeches I have to listen to in the Council Chamber!
This has been an interesting weekend for me from the point of view of international relations.   Last night, I chaired the annual meeting of the Horsham District Twinning Association in my role as their President.   In my speech to them, I welcomed what they did in terms of increasing international understanding, albeit in a small way, and made the point that the answer to many of the problems in the world was not simplistic, bellicose statements that we so often hear from politicians, but an attempt to meet people in a genuine attempt to understand people’s culture, traditions and viewpoint.
This need to work together in a spirit of mutual understanding is the only way forward and is summed up in one of my favourite quotations – being a quote from Thomas Jefferson – ‘We must all hang together, or most assuredly we will all hang separately.’
All of which brings me to the Ambassador prize which is a cup awarded to the student who has made a significant contribution towards improving relations between the UK and Japan.   It is my pleasure to announce that the winner is Shinsuke.   Shinsuke has been Captain of the Boys’ Basketball team and over the last year has led the team in ten basketball matches against a number of schools in Surrey and Sussex, both home and away.   For the school, it’s not just the game that matters, but also the experience of mixing culturally with students during matches as well as socialising following a match.   Shinsuke has worked hard to establish lasting friendships with local schools.   He is therefore a most fitting candidate for the award.
Councillor Philip Circus
Chairman – Horsham District Council