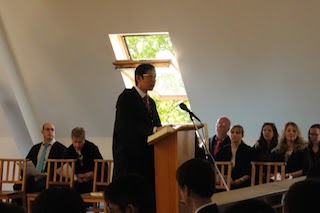 His Excellency Mr Koji Tsuruoka, Ambassador of Japan to the United Kingdom
Rt Rev Mark Sowerby, Bishop of Horsham
Cllr Peter Burgess, Vice Chairman of Horsham District Council,
Honoured Guests, teachers, parents, students and friends of Rikkyo School
I should like to thank you all for joining us today to help celebrate this important milestone in Rikkyo School’s history.  I should especially like to thank those who have flown from Japan for this occasion.  It is lovely to see so many people, who always support us!
We are honoured to have the presence of the Ambassador of Japan to the United Kingdom, the Bishop of Horsham, the Vice Chairman of Horsham District Council, the Senior Vice President of Rikkyo University, Secretary of Japanese School LTD, Rev Martin King, Rev Ian Maslin, among others.
I am afraid we don’t have enough space at the front for all the important guests so my apologies if I’ve missed any!
Thirty years ago, I came to Rikkyo School as a new math teacher just after my graduation from the University in Japan. I didn’t have much information about Rikkyo School because there was no internet or website at that time. The only information I had was a flyer which I had found on the notice board at my University saying Rikkyo School was looking for some math teachers and I could see the beautiful picture of the main building on it. After 26 hours flight from Japan to the UK, my unexpected life in Rikkyo School had begun. On the way to Rikkyo School from the air port, the former Head Master, Mr Usuki took me to the school from Heathrow Air port. I could see beautiful green hills and pastures and many more sheep than the people of this country. I could also see the lovely houses and cottages with nice gardens. Narrow winding roads, woods and streams. It was my first memory of this country. It’s been absolutely the most fantastic scenery in my life. It was the beginning of my days abroad for the first time and I was so young. It was the 15th anniversary year for the Rikkyo School.
There might be critical moments in your life which lead you to somewhere beyond your expectation or imagination. I had taught for 3 years at Rikkyo School. There were over 300 students at that time. There were some extra tables needed on the stage of the new hall. The school was filled with lots of energy. I could feel it. And also it was the era when Japan’s economy was booming. Rikkyo School was growing as well in a support and acceptance from the people of this area. Most of the school traditions were established at that time. Not only were the students young- we all were!
Time flies. There had always been the strong memory of Rikkyo School in my mind. I came back again 2014 to Rikkyo School after being a teacher in Japan for 24 years.
I found some changes but most of the ways of the school were still kept going. The biggest change was that the school had lots of students coming from Japan directly. Modernization of the information technology helps us easily to make contact with people all over the world. Students can email to their family easily. The school website offers lots of information to parents, expected students and new applicants for teaching or other staff. So it doesn’t matter where you live. You have to know another culture and live together as members of the world. This is the era in which we live now. We keep changing for the sake of students who make our future of the world. I would like Rikkyo School combine both the Japanese way and British way instead of being just the Japanese way or the British way. We have to keep listening to the voices from outside so that we are not isolated.
However things change with the demands of time, there should be something very important which makes the school RIKKYO School. The one thing not being changed is the atmosphere of the school. The quiet moments in the morning services, three times for school meals with all students. And the most important thing is the energy the school is filled with. I had once strongly felt it thirty years ago. The energy might come from the passion of students who come here very far from their home to learn something very special by living in the UK. It also might come from enthusiasm of the teachers and staff. It might come from the love of our supporters in the area and from parents.
I would like to say a big thank to all our supporters, parents, teachers and staffs at this great moment in the school’s history. And I do hope that the days of the Rikkyo School in England will be special moments for all our student’s lives.
Thank you.