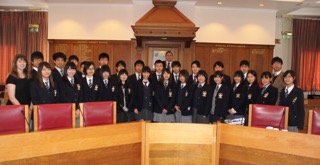 An insight into the Horsham District Council
On Thursday morning of the 7th May, 26 Rikkyo students headed to the Horsham District Council as we had been invited to learn more about democracy.
All our hearts were full of anticipation of what was going to come as we had been doing a lot of preparation at school to be able to follow the presentation given there. In the preparations we mainly focused on the coming big event, the election of the committee and MPs as well as the general meaning of democracy. We even had a heated conversation about the international relationships and problems of Japan and England which we all enjoyed very much.
So it is not hard to believe how much our heartbeats rose when we first stepped into the council. It felt like stepping into a sacred place which had been closed to you until then. That feeling strengthened when we were warmly welcomed with coffee and tea as well as biscuits by Ms Sue Franks who gave us the feeling of being part of the council. But the most exciting moment which made our hearts dance was when we entered the council chamber. It was like a set of a movie inside the Parliament with a round table with big seats, microphones for each person and at the end of the room a big chair like a throne for the chairman.
After all of the students were seated we were welcomed by the Chairman of Horsham District Council, Brian O’Conell who politely gave us an insight of what exactly a council is. We were all surprised and honoured to hear that we, the Rikkyo School students, would be the last group to sit in the council chamber as the council was going to move to another building in the very near future. It gave us the feeling of becoming part of the history of Horsham Council. Then Ms Sarah Hogben who is in charge of communication gave us a power point presentation introducing the Horsham District and the way they govern it. We learned that Horsham had been selected to be the second happiest town in Great Britain due to a high employment percentage, many leisure activities and high health standards. They also explained that Horsham has an ageing population so they were focusing on making sure to provide enough leisure activities through building swimming pools which does not only work as a place of leisure but also helps to keep people fit and active. An interesting fact to hear was that the Horsham district lacks in the number of houses due to a high percentage of divorce which makes one residence into two doubling the number of houses needed.
The presentation was then followed by a question time where the chairman listened to our questions and tried to satisfy all of our curiosity. A lot of questions about the election were asked and we are grateful to the chairman for even answering to questions about personal matters. Unfortunately not all of the students were able to ask a question as we were running out of time and had to return to school. At last we gathered in front of the seat of the chairman and took a picture in remembrance of our trip.
To look back on our trip to the Horsham Council it cannot be denied that it was a good experience and gave us a little insight into the complex world of politics which always seems to be so hard to understand.