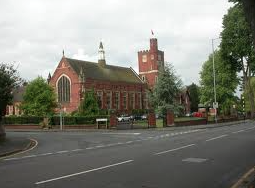 In this spring holiday , l did exchange program in Wolverhampton Grammar School for a week . (This is my first time exchange program.)  My partner called “Izzi”came to Rikkyo school and joined in my class to study Japanese for a week last year. We are both fifteen years old, but because most schools in England start in September, we are in different school year.
In the first day, I went to school by bus because it was too long for a walk. Students go using several different transportations. And they come from various countries, too.
When I went into the classroom, many people tried to talk with me about Japanese culture and sports. We also talked about the difference between a Japanese middle school and a British boarding school. I thought of a lot of differences between Japanese curriculum and British *GCSE curriculum.
*GCSE is most important examination for British teenagers.
It might be useful to go to a university.
Then, the first lesson in chemistry;
We were doing an experiment (Faraday’s laws of electricity) for learning about electricity.  I think we do it in first grade of high school in Japanese curriculum.
Second lesson was physics and we learned about gravity and how to make a wave.
Third lesson was biology;
We learned about heart beat and blood vessel.  This was quite easy for me because I learned about these things before.
Then the lunch time;  we had lunch in the hall.
This school has a big hall, and they ate there. They can bring in their own food.  They were eating pizza, pasta, vegetables, and yoghurt.
The forth period; we enjoyed Cricket.
This game was so interesting, but it was too difficult for me because that was my first time to do cricket.
After school,we went back home and had a dinner with her family.
Next day, Izzi and I went to school in her brother’s car!
In England they can start to drive when they become 17 years old.
On that day the first and second lesson was a double French.
Izzi’s school had a lot of international language curriculums (French,  German,  English,  Latin,  Italian and Japanese) but they do not have to take it necessarily; they just take it if they want.
After school, we went to watch a football game with her mother and grandmother.
This week I thought “I can break the language barrier with my friend.”
I had a really good time in this school.
(Middle School 2 Girl)