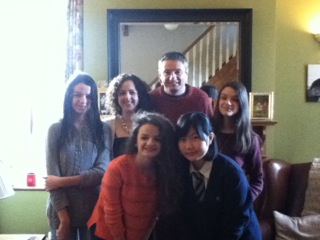 It was in January when my homeroom teacher offered us a chance to have an exchange with an English local school. Before I entered Rikkyo School I was at an international school, and because of that, I was able to speak a little bit of English. I decided to do the Millais School and Rikkyo School exchange because I wanted to make some kind of connection between the schools as well as connection between students.
When Millais exchanges came to Rikkyo, Rikkyo students and teachers tried their best to teach about Japan. At Millais school, we did not really learn about England, but all of the classes were taught in English so it was very new to us.
We also had an opportunity to learn Chinese; we learnt couple of Chinese characters and greetings.
One of the differences between Rikkyo and Millais was that students were allowed to choose which classes they would like to take. This was very interesting because most of the students we met in each class were new to us. All the students at Millais School were curious to learn not only Japanese language but also Japanese culture.
The class I enjoyed the most was the cookery class. We made bread with 23 students in the cookery. While baking the bread in the oven, we had time to communicate with Millais students who were about the same age as I was. This was amusing; we were able to hear a lot of funny stories about their
school teachers. This kind of free time made our conversation grow livelier.
It feels as if I had spent a very long time at Millais School because every day was filled with many excitements and many enjoyments. After school, our exchanges had planned many activities to do with us: hopping, bowling, laser quest, party and so on. On the night before our exchange finished, one of the exchanges invited us to their house to have a party. We went to her house and ate fish and chips, did small fire works in the garden and watched a DVD called Twilight. At the party, I got really close with the buddy of another Rikkyo student. Until then I was not really close to that girl but the mood of the party made us really good friends.
Right now most of the students who have done the exchange are still keeping in touch. We are planning to meet up in Japan after they graduate from high school.
After finishing this exchange, I sometimes feel a little bit of loneliness. This is the evidence to show how much I enjoyed this exchange.
I really appreciate that the both schools gave us such a great chance to have a connection between us. I would definitely recommend to other students to think about taking part in the language exchange or even trying out with the speaking club held at Rikkyo School on every Tuesdays after school.
(Middle School 3  Girl)