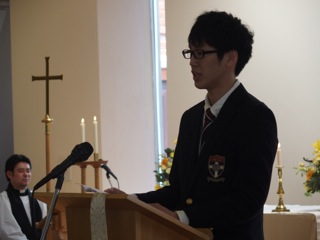 Hello everyone.
Now, I feel a bit nervous standing in front of such a lot of people and making a speech. But also, I’m proud of myself to be chosen as a representative of High School 3 students.
Today, I’m going to be talking about my experience during my three years here.
First of all, when I came to this school, I was just a 15 year-old boy. At that time, I was filled with hopes and expectations for the future. However, there were lots of things that I had never imagined. For instance, the boys’ dormitory was crazy, and there were teachers as strict as prison guards. This was my first impression of this school. Frankly speaking, I don’t know how many times I wished I had gone to a high school in Japan.
Do you know it is often said that the Japanese are people with no individuality? However, I found, there were many interesting students here. Every student had individual ways of expressing themselves and they tried to demonstrate this. Honestly, due to my selfish and troublesome characteristics, I had many people who were hard for me to deal with; the seniors tended to tease me every time I got into some trouble, the juniors had no respect to the seniors, and my classmates would not be quiet, so sometimes they really annoyed me.
But now, I am deeply grateful to them and this is why: in a big community like a high school in Japan, I wouldn’t need to communicate with everyone; I would be only with people I really like, whereas in a smaller community like Rikkyo School, I have to get involved with everyone including the people that I did not like and, thanks to this, I could expand my point of view and look at myself more objectively. Therefore, I would like to say thank you to everyone that I have been working with in these last three years.
Secondly, this is not about this school, but it is what I’d like to say the most in my speech.
As you know, while we are in this school, we don’t have enough information about what is happening in the outside world. If you go into the world just as you are, you will face serious problems. I had an experience of going to an English school in Wimbledon for 2 months. And there, I had lots of opportunities to discuss customs, politics, economy and so on. I had thought it would be easy at that school until I started; but it wasn’t. In addition, I couldn’t say anything. It was not because of my lack of ability to speak English, but it was simply due to lack of knowledge. Then, I felt a sort of disappointment in myself because I had regarded myself as a person who had extensive knowledge of the world. But I was obviously mistaken. So I thought: I have to study harder to build up sophisticated knowledge and opinion. But this is not only me; you can have the same problem when you go into the outside world.
Finally, I’m going to talk directly to the juniors here. What I want you to do is work hard and play hard. In my case, I have a lot of regrets from the past here because I was lazy. So I don’t want you to make the same mistake. I know you are very busy studying for exams just as I was. However, sometimes it will be useful and enjoyable to study other subjects that you are not interested in. Also, I know many students here who would say “it is boring.” So, why don’t you make it more exciting? It doesn’t matter if you are a bit naughty. You only live once. It is a waste of time not to enjoy yourself.
To sum it all up, I just want you to work as hard as you can and have fun so that you don’t regret anything.
This is all I would like to say in my speech. So, all that remains is for me to thank you for listening.