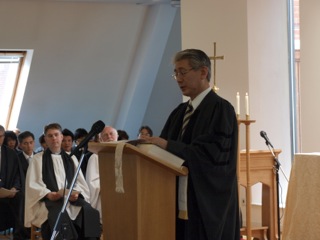 ７月７日（土）創立４０周年記念感謝礼拝が行われました。
以下、本校校長の式辞をご紹介致します。
＊   ＊   ＊   ＊   ＊
式辞
立教英国学院校長 棟近 稔
Mr Akira Imamura, Minister, Embassy of Japan
Cllr Leonard Crosbie, Chairman of Horsham District Council
Honoured Guests, teachers, parents, students and friends of Rikkyo School
I should like to thank you all for joining us today to help celebrate this important milestone in Rikkyo School’s history. I should especially like to thank those who have flown from Japan for this occasion. It is lovely to see so many familiar faces, including old friends, old boys and former colleagues.
We are honoured to have the presence of the Consul General from the Embassy of Japan, the Chairman of Horsham District Council, both the President and Vice President of Rikkyo University, President of Rikkyo Womens College, Rev Martin King and Rev Canon Nigel Nicholson, Headmasters of Rikkyo Ikebukuro, Koran Jogakuin, Teikyo School, and Japanese School in London, representatives from St Catherine’s and Millais Schools among others.
This has been a year for celebration: Her Majesty The Queen’s Diamond Jubilee, the Olympic Games in London.  And today we celebrate our School’s 40th Anniversary.
Rikkyo School was founded in 1972 by the first headmaster, Yasushi Agata, with the idea of educating the children of Japanese parents working abroad, in both Christian and Japanese traditions.
It was the very first Japanese private school outside Japan. At that time, nobody dreamt of starting such a school outside of Japan. I cannot help but admire Mr Agata’s foresight, courage and determination. When the School opened its doors in 1972, there were just 19 primary school children. At that time, the School looked very different to today – with only the current girls dormitory (we still call it the main building) which had to be used for accommodation, classrooms, dining room as well as staffroom and office!
I first came here in 1977 – the year when the School celebrated its 5th Anniversary, and the Queen celebrated her Silver Jubilee! I used to live in that main building next to students, and was often woken up by the smell of frying bacon wafting from the old kitchen! Over the years, the School has had its ups and downs. While Mr.Usuki was the headmaster, the School expanded and the many buildings we can see
today were built through generous donation from many Japanese companies. Now we have well over 2000 alumni working all over the world.
Last month, we welcomed a former graduate who visited the School from Japan. He is now a representative of a Japanese cosmetic company and was visiting the UK to oversee his company’s European expansion. He told me that one of his long-standing ambitions was to see his product displayed in Debenhams in Guildford – and he had just fulfilled that ambition!
Today we have 147 students, and I am happy to add that two of them are second generation Rikkyo School students.
Last year we experienced the terrible disaster in Japan. I would like to take this opportunity to express our sincere gratitude for the kindness of the local community who contacted the School with messages of sympathy and many who gave their support following the disaster.
It reminds me quite vividly not only how much this School has been supported by the English people for these 40 years but also the importance of our school’s existence in England being a bridge between English and Japanese people – a legacy from its founder who declared the School as being for the “mutual friendship and understanding of our two nations, Great Britain and Japan”.
Today, the importance of the bond between nations, the bond between people is far greater than 40 years ago.
As we move into the next decade of the School’s history, Rikkyo School must continue to act as a bridge between two nations and two nationals. I am proud that our
School is firmly established within the local community: our annual Open Day is always well attended; and we hold an annual Japanese Evening for pupils and parents from local schools as well as Friends of the School. Our students also help with local fundraising activities. Many of our students also have the opportunity of staying with local families, giving them the chance to experience English life and to practice their English. Just some examples of how our School is working to develop cultural awareness and understanding between our two nations.
In a world of increasing globalization, I believe it is our mission to produce the next generation who can work in harmony together, in a future world.
Our School’s achievements are due to its dedicated teachers and staff, and in no small measure, to the strong support of its Trustees, parents and friends, many of whom are here today.
I am confident that Rikkyo School will continue to grow from strength to strength, and I should like, once again, to thank you all for joining our service of thanks and celebration today, and for your continued support.