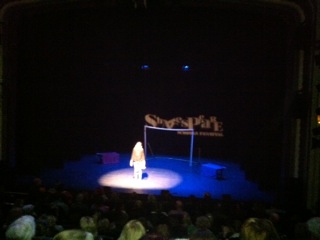 高校3年生の私立文系コースでイギリス人によるEnglish Projectのコースを受講している生徒が、先日地元の中／高校生によるシェークスピア劇を鑑賞してきました。
参加した生徒の英語レポートが届きましたので、以下にご紹介します。
＊   ＊   ＊   ＊   ＊
Theatre Trip
I went to Horsham Capitol Theatre with H3 project class group, Mrs Sharp and Ms Lovegrove on 16th October 2013. It started at 7pm, so I ate dinner earlier and then went there.
I had studied about Shakespeare in project class before I went to see the play. I enjoyed studying because the Shakespeare play was interesting.
Many people were in the theatre which was clean and warm.
First, I saw Romeo & Juliet, but the story had changed to a football theme. Although the performers were younger than me, they acted very well.
Second, I saw the Tempest. It was a serious story, but I couldn’t understand it all because this was the first time I had seen it and the performers spoke too fast, but I enjoyed seeing it anyway.
Third, I saw a Midsummer Night’s Dream. It was a comedy and an interesting story. The performers were handicapped people, but they were good characters and acted very well.
Last, I saw the Merry Wives of Windsor. It was more difficult than the Tempest for me, so I couldn’t understand it.
My favourite Shakespeare play was Romeo & Juliet because it was sad, but it was a good love story. I enjoyed studying Romeo & Juliet because I could know about Shakespeare and his work.
Kyohei
＊     ＊     ＊
Theatre Trip
I went to the Capitol Theatre to watch Shakespeare plays on Wednesday 16th October. I went there with Ai, Ayano, Daisuke, Yo, Kyohei, Mrs Sharp and Miss Lovegrove. It started at 7p.m. The first play was “Romeo and Juliet.” It was shorter than the film we watched in class. It was about 20minutes. We could understand the details of it because we have been studying “Romeo and Juliet” since last term. But it was really difficult to comprehend the second play. The name of it was “The Tempest.” It started with a dark atmosphere. However, in the end of the play, the bad people are excluded and there was a happy marriage, so it had a happy ending. When I watched it I felt like I was going to fall asleep. If I had known the story, I could have enjoyed it more. After that we had a break and the third play started. It was “A Midsummer Night’s Dream.” Its story was easy to understand so I enjoyed it. I also enjoyed the background music because it was music that I knew. The last play was “The Merry Wives of Windsor.” It was a comedy. Many people were laughing during this play. Not always, but sometimes I laughed. I only understood “Romeo and Juliet”, but I still enjoyed all of the plays.
Mana
＊     ＊     ＊
Theatre trip
I went to the Capitol Theatre on Wednesday 16th October to watch plays which were written by Shakespeare. The Capitol Theatre looked new and it was cleaner than I thought it would be and we sat in the middle of the row.
First, the girl explained what plays we would see. We watched 4 plays which were acted by children who were younger than us or the same age. The first play was Romeo and Juliet which we have studied for a long time. It was very similar to the film of Romeo and Juliet but it was shorter than the film. I think that the Nurse actress was very nice because her character was the same as I have imagined. However, the actress of Juliet was very small and her voice was too quiet to hear.
The second play was the Tempest which was a serious story about a big storm. One of the girls who acted in the Tempest had come to Rikkyo School before. The play was very powerful so I was given a good impression of their acting.
We watched A Midsummer Night’s Dream for the third play. It was a comedy in which disabled children acted. The play made me happy and it was fun. The actors looked very happy too and did their best.
I really enjoyed watching every play and I learned a lot of information about Shakespeare and his plays.
Ai