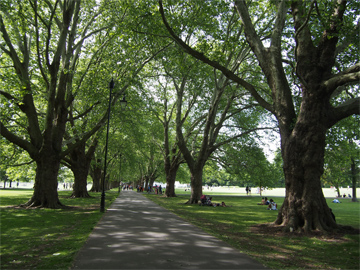 This summer was wonderful! I didn’t make plans this summer, but anyway, I enjoyed the summer. I want to talk about three things.
First, I went to Harajuku with my friend. His name is Masa. We ate roast beef. That was yummy! After lunch, we bought clothes at Guess and we went to an amusement park in Odaiba. It was a fun place.
Second, I went to the Tokyo Dome with my family. It was a very big dome.
Third, I went to a luxury restaurant. That restaurant’s food was very nice. I want to visit it again.
(M2 boy)

My sister is a high school senior student. She wants to go to Hokkaido University. So, I went to Hokkaido University with my family. I got lost because the place was large. In Hokkaido, it was very cool. On that day, dinner was Mongolian mutton barbecue. It was quite a good dinner. We had a great time in Hokkaido!
(M2 girl)

I went to Austria. On the first day, I went to Wien. What a beautiful place that was! It was the most beautiful place I have ever visited. For example, Schloss, Schonbrunn, Wien, and the old city centre were very nice.
On the second day, I went to Salzburg. It took about two hours to get there by train. Salzburg is colder than Wien. I ate sausages and sauerkraut. This food was delicious, but the sausages were salty. After lunch, I went to Mozart’s birthplace. “What a narrow place this is!” I said. I enjoyed my summer holiday.
(M2 boy)

I spent a very happy time during my summer holiday.
I went to Karuizawa on August 7th. Karuizawa was very cool and a beautiful place. I felt very comfortable.
On the might of August 27th, I went to London with my family. After 13 hours, I arrived at Heathrow airport in the morning. On the first day in London, I was very tired because I didn’t sleep on the plane, so I slept at the hotel. On the second day in London, we went to the British Museum. It was very big and I was surprised! On the third day, we went to an Arsenal vs Tottenham football match. Both teams were very big and strong. I was so excited before the match. I support Arsenal because my favourite player is Guendouge. But, my No.1 team is Paris Saint Germain in France. The result was a 2-2, tie. I was very happy! On the fourth day, my mother and my brother went back home. I was so sad because we wouldn’t be able to meet for three months. Then, my father and I went to Paris by train. The train’s name was “Eurostar.” We arrived in Paris at 13:00. On the fifth day, our schedule was going to Mont
Saint-Michel. But, I slept till noon and I couldn’t go there. I said “Sorry…” to my father. Instead, we went to Paris Saint Germain’s home stadium. We didn’t go to Mont Saint-Michel, but I had a happy time. On the sixth day, I came to Rikkyo. My new school life has started!
(M2 boy)