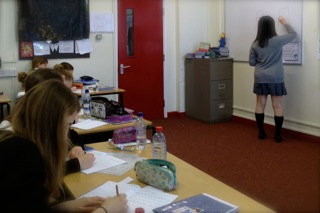 地元現地校ミレースクールにこの春１週間留学した、当時高等部１年生だった女子生徒から英文レポートが届きましたのでご紹介します。
＊     ＊     ＊     ＊
During the spring holidays, I did a student exchange and homestay.
When we got to Scarlett’s house, which was also what I would call ‘home’ for the week, we went on a walk around the neighbourhood. I thought the town was really beautiful, and I loved it. When we got home, we made some cupcakes. We were originally going to make lemon cupcakes, but we didn’t have lemon curd, so we made sticky ginger cupcakes instead. They were very sticky and delicious.
On Sunday, we went to Hever Castle. This is where Anne Boleyn, wife of Henry VIII, spent her childhood. We didn’t see much of the garden because it was cold and windy, but I’m sure it looks really pretty in the summer. The castle was interesting since I did not know much about English history. And now that I think of it, it might be the first castle I have ever visited.
On Monday, I went to school with Scarlett. First, there was a tour of the school, starting from the library. The library was nothing like our library at Rikkyo. The only thing that was the same was that there were books. Instead of just having desks to study like Rikkyo does, there were some nice chairs to sit down on and read in. Also, there were computers, and some of them were touch-screen. That really amazed us. We were also amazed at the fact that most of the stairs were one-way. It must be because there are so many students at Millais.
As we went around the school, I found quite a few classrooms we don’t have at Rikkyo. For example, we don’t have cooking rooms to use in class. We do have a small kitchen inside the girl’s dormitory, but obviously the boys can’t go in, and it’s way too small for a whole class to be there.
After the tour, I followed Scarlett to her classes. I particularly enjoyed doing Ethics, because it was something I hadn’t done at Rikkyo yet. Art was also quite interesting since I don’t take it anymore.
On Tuesday, we didn’t have school, thanks to the snow, so Amy and Yuka came over and watched “Howl’s Moving Castle”. We all enjoyed it. For dinner, we went to a restaurant to celebrate Risa’s birthday. We took a lot of photos and danced to the music. It was fun and the food was delicious.
In Japanese classes, we did a little presentation on the difference between Millais and Rikkyo, helped students practise speaking, and taught some kanji.
We also learnt some Chinese. It was difficult to pronounce it correctly, but easy to recognise the Chinese characters since some of them are the same in Japanese. It was a bit funny to me how the Chinese teacher sounded just like my friend’s mom, who is also Chinese. They both had the same accents and the same way of pronouncing words.
There were many more different classes that we don’t have at Rikkyo, like performing arts, cooking, sewing, Zumba, etc. I am a bit jealous that they have such a wide range of subjects to choose from, when we only get to do the ‘normal’ subjects like Maths and History.
Being a normal English student at a normal English school was really interesting. I am very thankful to my parents and teachers for letting me be part of such a wonderful opportunity, and to Mr and Mrs Eddie for accepting me (and Risa!) so warmheartedly.
I really wish I could do this next year too.