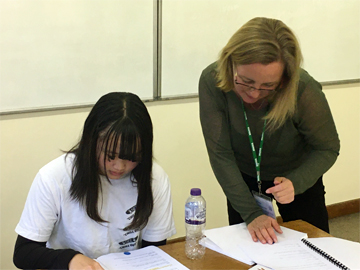 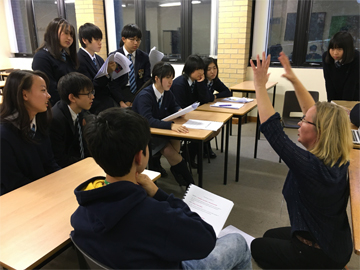 Earlier this year the Rikkyo School, England and the Royal Grammar School, Guildford agreed to work together on a joint drama production. The aim of the project was to allow students from both schools to meet and work together on a collaborative project that would develop their linguistic abilities and their interpersonal skills.

However, it became obvious quite early on in the process that in order to showcase of the talents of both schools’ students it would need to be a bilingual production. Unfortunately, we could not find any existing dramatic work in both English and Japanese that would be suitable. Sowhat should we do?

The answer came from the recent and widely-acclaimed Manga Exhibition that was held at the British Museum. Alice in Wonderland featured prominently. It was further explained that Alice in Wonderland had been translated more than 400 times and the work was an inspiration to major Japanese artists such as Yukio Mishima, RyunosukeAkutagawa and Yayoi Kusama.

As any Guildford resident knows, Lewis Carroll (author of Alice) was connected to our small provincial town by the fact that he owned a house here which he purchased for his six sisters. He visited frequently, socialised with the local Guildfordians even including the headmaster of the Royal Grammar School at the time, The Rev Dr Merriman. He preached in St Mary’s which is near to his former property and unfortunately as he died in Guildford on 14th January 1898, having contracted pneumonia over Christmas, he is buried on the Mount.

Consequently, we decided to use Alice in Wonderland as a “cultural bridge” that would connect Guildford with Tokyo for our dramatic production. In part one, we will present the history of Lewis Carroll’s connection with Guildford and the impact of Alice in Japan. This is presented in English. In part two, we will stage Alice in Wonderland in Japanese, with full Japanese costume. It’s Alice, but as you have never seen it before!