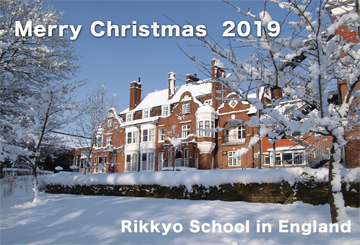 This year has seen increased attention on Japan with the Rugby World Cup and the build up to the Olympics in Tokyo next summer. We at Rikkyo School have also been doing our best to promote Japanese culture within the local community throughout the year.

One of our biggest cultural events is the annual Japanese Evening which took place on 10 May and was attended by students from local schools as well as friends in the local community.

Many of the students enjoyed staying with homestay hosts in the local area during the May half term week; and at the end of term in March and July, giving them the opportunity to practise their English and experience British life.

The School continues to expand its links with other schools in the local area and this year a number of our students had the opportunity to spend a week at The Weald School in Billingshurst, Forest School in Horsham, and Royal Grammar School in Guildford.

In particular, we have established close collaboration with the College of Richard Collyer in Horsham and three of our students spent a term at the College giving them a better insight into the education system in the UK. Rikkyo students assisted with a Japanese University convention jointly with Collyer’s College aimed at promoting Japanese universities to British students; and also worked on a Tanzania project with students from Collyer’s.

Another new venture for Rikkyo School has been a joint drama project with students from the Royal Grammar School in Guildford and we look forward to seeing the final performance in February.

This year we have also started the Cambridge University Experience programme for students, giving our students the opportunity to stay at Kaetsu Centre Murray Edward College and experience a taste of university life and culture at Cambridge four times a year.

Music is an important part of student life at Rikkyo and throughout the year our talented music students have won awards at various music festivals. Our end of term concert in July was well attended and raised funds of £330 for the local children’s hospice charity, Shooting Star Chase. And the Christmas concert on 5 December raised £426.14 for the hospice charity.

During the summer break, Rikkyo School co-hosted two projects: the UK-Japan Young Scientist workshop with the Clifton Scientific Trust and Cambridge University; and the UCL-Japan Young Challenge. In August a group of young pupils from Rikkyo primary school in Tokyo enjoyed another taster week at Rikkyo School.

The relatives of two WWII flight crew who lost their lives when their two bombers collided over the School site in 1944 arranged to build a permanent memorial to them in the School grounds. And on 31 August there was a special service at the School to commemorate the lives of these brave RAF airmen. It was an emotional service and over 100 people attended, including local councillors, the Royal British Legion, and relatives of the airmen. Visitors can see the memorial along the public bridle path which runs through the School grounds.

Our annual Open Day took place on 20 October and saw a good attendance by parents, friends and the local community. This year’s theme was ‘Awaken Your Glory’ and the students worked hard to produce some impressive classroom displays including topics such as Japanese festivals, Ninja and Samurai, Shinto, Japanese snacks and a spooky Halloween room.

In sport the students have enjoyed played numerous basketball, volleyball, badminton, tennis and football fixtures with other schools around Surrey and Sussex.

And finally at the end of term, the students organised the annual carol concert at Elmbridge retirement village, to put us all in the festive spirit.

Thank you for your support throughout the year, and best wishes for a Merry Christmas and Happy New Year from all at Rikkyo School.